TOPIC
AUTHOR
Close
Search
Close
Search
Close
Search
Close
Search
EVENTS
MEMBERS
LOGIN
SIGN UP
Quotes
Topics
Pictures
Questions
Authors
Blog
About
Terms
Privacy
Sitemap
Get in Touch
Advertise
Removal Request
Subscribe
Contact Us
Social
Facebook
Instagram
Twitter
Pinterest
Close
Submit Quote
Latest Quotes
Browse our latest quotes
Topic List
Categorized list of quote topics
Famous Authors
Alphabetical list of influential authors
Picture Quotes
Custom and user added quotes with pictures
When I was younger, I'd put my arms in my shirt and told people I lost my arms. Would restart the video game whenever I knew I was going to lose. Slept with all the stuffed animals as a child so none of them got offended. Had that one pen with 4 colors, and tried to push all the buttons at once. Poured soda into the cap and acting like I were taking shots. The hardest decision was choosing which Ni ntendo game to play. Waited behind a door to scare someone, then leaving because they're taking too long to come out or you had to pee. Faked being asleep, so I could be carried to bed. Used to think that the moon followed my car. Watching two drops of rain roll down window and pretending it was a race. Went on the computer just to use Paint. The only 'fake' friends I had were invisible ones. I used to sing in the shower. Swallowed a fruit seed I was scared to death that a tree was going to grow in my tummy. Getting a bruised knees heals better than a broken heart. Remember when we were kids and couldn't wait to grow up... what the hell were we thinking?
Mahmoud El Hallab
303 Likes

303 Comments
RELATED QUOTES
Someone's past is just that...their past. The majority of people learn lessons from what they did wrong in their past relationships. Don't hold their past against them unless it bleeds into the present...
Unknown
67 Likes
Past Relationships quotes
Forget The Past quotes
Things Happen For A Reason quotes
Dont Look Back quotes
Moving Forward quotes
Moving On quotes
Letting Go quotes
There's always going to be those awkward moments when you walk past someone and remember the times you once had with them.
Unknown
147 Likes
Feelings quotes
Memories quotes
Past Friends quotes
Past Relationships quotes
Past Love quotes 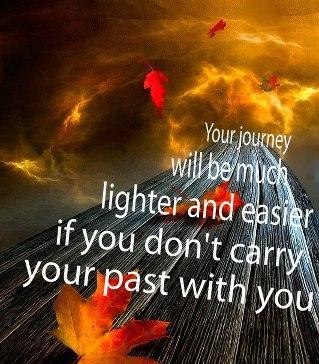 Your journey will be much lighter and easier if you don't carry your past with you.
Unknown
220 Likes
Life quotes
Journey quotes
Moving Forward quotes
Moving On quotes
Forget The Past quotes
Dont Look Back quotes
Letting Go quotes
Past Relationships quotes
Past Friends quotes
Past Love quotes
Change quotes
Just let the past, just be the past. And focus on things that are gonna make us laugh. Take me as I am, not who I was. I'll promise I'll be, the one that you can trust.
Chris Brown
147 Likes
Dont Judge Me quotes
Imperfection quotes
Flaws quotes
Past quotes
Forget The Past quotes
Acceptance quotes
Being Judged quotes
Judgement quotes 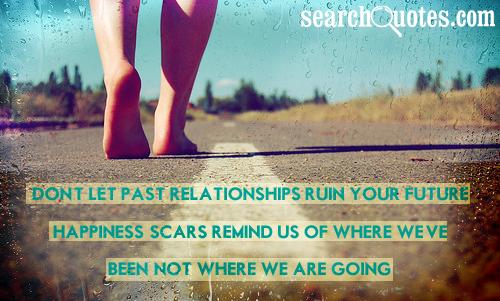 Don't let past relationships ruin your future happiness, scars remind us of where we've been, not where we are going.
Unknown
470 Likes
Past Love quotes
Forget The Past quotes
Past Relationships quotes
Relationship Advice quotes 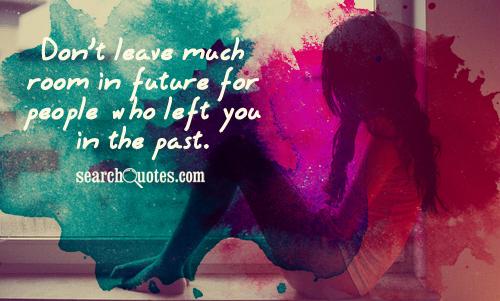 Don't leave much room in future for people who left us in the past.
Unknown
99 Likes
Past Love quotes
Past Friends quotes
Past Relationships quotes
Letting Go quotes
Moving On quotes
Moving Forward quotes
The past is weary and is long gone. Let go of the past and start grasping the opportunities that come your way.
Unknown
16 Likes
Past quotes
Present quotes
Future quotes
Opportunity quotes
Somewhere in my past, I fell in love with you. That Somewhere in my past, there was only me and you.
Unknown
50 Likes
Past Relationships quotes
Missing You quotes
Broken Heart quotes
Lost Love quotes
Past Love quotes
I don't regret the past because the past made me into the person I am today...
Unknown
17 Likes
Past quotes
Learning quotes
Growth quotes
Self-development quotes
Identity quotes
Remember the refrain: We always build on the past; the past always tries to stop us. Freedom is about stopping the past, but we have lost that ideal.
Lawrence Lessig
0 Likes 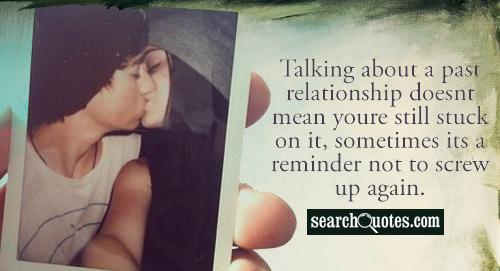 Talking about a past relationship doesnt mean youre still stuck on it, sometimes its a reminder not to screw up again.
Unknown
124 Likes
Past Relationships quotes
Past Love quotes
If years from now I see you somewhere, I will look at you and smile. I will remember all the good times we had together.
Unknown
60 Likes
Past Friends quotes
Past Relationships quotes
Memories quotes
Past Love quotes
TRENDING
TRENDING TOPICS
Mar 01
25th Wedding Anniversary
50th Anniversary
Broken Love
Budgets
Clients And Customers
Death And Dying
Dreams
Fake People
Goals
Haters
Inspiration
Life
Life Lessons
Listen To Your Heart
Nurses
Strong Women
Uncertainty
Wedding Anniversary
Fake People
Strong Women
ABOUT Terms
Privacy Policy
Removal Request
Sitemap
Contact Us