TOPIC
AUTHOR
Close
Search
Close
Search
Close
Search
Close
Search
EVENTS
MEMBERS
LOGIN
SIGN UP
Quotes
Topics
Pictures
Questions
Authors
Blog
About
Terms
Privacy
Sitemap
Get in Touch
Advertise
Removal Request
Subscribe
Contact Us
Social
Facebook
Instagram
Twitter
Pinterest
Close
Submit Quote
Latest Quotes
Browse our latest quotes
Topic List
Categorized list of quote topics
Famous Authors
Alphabetical list of influential authors
Picture Quotes
Custom and user added quotes with pictures
Nobody could feel that more than me. I was hurt the most. Nobody felt what I felt. It happened to me and it happened to me in front of the world. It was embarrassing, it was humiliating, it was hurtful it was. Its not easy. I lost my best friend. Every thing I knew switched in a night and I couldnt control that so I had to deal with that and thats not easy for me to understand or interpret. And, its not easy to interpret on camera, not with the world watching. It was hard for me to even pay attention to my mind and figuring things out because now it became a circus and I felt protective. I felt like the only person they hate right now is him. It was a weird, confusing space to be in cause as angry as I was, as angry and hurt and betrayed, I just felt like he made that mistake because he needed help and whose going to help him? Nobodys going to say hes needs helpeverybody is going to say hes a monster without looking at the source. I was more concerned about him.
Rihanna
206 Likes

206 Comments
RELATED QUOTES
When I say manage emotions, I only mean the really distressing, incapacitating emotions. Feeling emotions is what makes life rich. You need your passions.
Daniel Goleman
0 Likes
There are powerful emotions that bring two people together in wonderful harmony in a marriage. Satan knows this, and would tempt you to try these emotions outside of marriage. Do not stir emotions meant to be used only in marriage.
Richard G Scott
2 Likes
There are only two emotions that belong in the saddle; one is a sense of humor and the other is patience.
Unknown
30 Likes
Horse quotes
Emotions quotes
Don't let your emotions outweigh your intelligence.
Unknown
52 Likes
Emotions quotes
Patience quotes
Being The Bigger Person quotes
I can't say I have control over my emotions; I don't know my mind. I'm lost like everyone else. I'm certainly not a leader.
Richard Gere
7 Likes
Emotions quotes
What is Love? Various emotions wrapped up in one divine bottle of energy.
Sonny Long
13 Likes
Emotions quotes
The more clearly you understand yourself and your emotions, the more you become a lover of what is.
Baruch Spinoza
18 Likes
Reality quotes
Understanding quotes
Emotions quotes 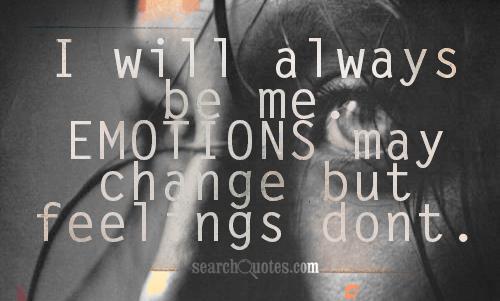 I will always be me. Emotions may change but feelings dont.
Unknown
188 Likes
Emotions quotes
Being Real quotes
Be Yourself quotes
Emotion quotes
I use music to express my feelings and emotions for the way I am feeling.
Lola Monroe
54 Likes
Emotions quotes
My emotions overload because there is no hand to hold, theres no shoulder here to lean on; Im walking all on my own.
Unknown
32 Likes
Being Alone quotes
Emotions quotes
Loneliness quotes
Comfort in expressing your emotions will allow you to share the best of yourself with others, but not being able to control your emotions will reveal your worst.
Bryant H McGill
4 Likes
Emotions are the fuel to really move you along - that's the only way you can create music. If you don't feel any emotions, it's not going to happen.
Jan Hammer
0 Likes
TRENDING
TRENDING TOPICS
May 14
Bad Timing
Balance
Battle For Our Lives
Be Positive
Be Yourself
Beautiful
Beauty
Being Disrespected
Best
Birthday Wishes
Bitchy
Deep Love
Dont Look Back
Ignorance
Life
Living
Love
Negative People
Self Importance
Value
ABOUT Terms
Privacy Policy
Removal Request
Sitemap
Contact Us