click me
Theater is a collaborative form of fine art. The word “theatre” is the alternative form for theater. Theater uses actors who perform live on stage to showcase an imaginary or fictional experience using prop, music, song, gestures, dance and speech. Theater is a very popular form of art and the stagecraft is so chosen so as to bring out the effects, authenticity and feel of the experience which is being performed on stage. Michael Jackson had once remarked, “Because I wanted to have a place that I could create everything that I that I never had as a child. So, you see rides. You see animals. There's a movie theater.”Theater actors are quite fine actors who possess great acting skills. All famous movie stars begin their career with theater and then move to films. Theater hones and sharpens their acting talent and makes them ready for films. Jim Carry had once remarked, “I absolutely want to have a career where you make'em laugh and make'em cry. It's all theater.”
QUOTES
There are an infinite number of ways to be moved in the theater.
Martha Plimpton
1 Likes
Theater quotes
Sponsored Links

In the theater, as an actor, you're welcoming people into your house.
Martha Plimpton
5 Likes
Theater quotes
Acting quotes 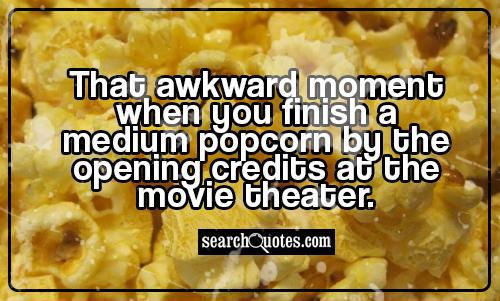 That awkward moment when you finish a medium popcorn by the opening credits at the movie theater.
Unknown
230 Likes
Funny quotes
Movies quotes
Theater quotes
Awkward Moment quotes
Whoever becomes the head of the National Theater finds himself in a position like that of Nelson's Column-pigeons dump on you because you're there.
Peter Hall
0 Likes
Theater quotes
I'd rather do theater and British films than move to LA in hopes of getting small roles in American films.
Kate Winslet
1 Likes
Theater quotes
Cinema quotes
Sponsored Links

The theater is so endlessly fascinating because it's so accidental. It's so much like life.
Arthur Miller
6 Likes
Life quotes
Theater quotes
Theater is, of course, a reflection of life. Maybe we have to improve life before we can hope to improve theater.
W R Inge
3 Likes
Theater quotes
You need three things in the theater - the play, the actors and the audience, - and each must give something
Kenneth Haigh
5 Likes
Theater quotes
You can throw away the privilege of acting, but that would be such a shame. The tribe has elected you to tell its story. You are the shaman/healer, that's what the storyteller is, and I think it's important for actors to appreciate that. Too often actors think it's all about them, when in reality it's all about the audience being able to recognize themselves in you. The more you pull away from the public, the less power you have on screen.
Ben Kingsley
1 Likes
Theater quotes
The best of our theater is standing on tiptoe, striving to see over the shoulders of father and mother. The worst is exploiting and wallowing in the self-pity of adolescence and obsessive keyhole sexuality. The way out, as the poet says, is always through.
Arthur Miller
4 Likes
Poets quotes
Theater quotes
Repression quotes
Adolescence quotes
Sponsored Links