click me
Letters are the symbols used as an alphabet in a language. The English language has 26 alphabets or letters. A combination of letters is used to form a word. Another interpretation of the word letter is a written form of communication sent by post or by a messenger. Letters are basically of two types- formal letters and informal letters. Informal letters are written in a casual tone and can be long while the formal letters are written precisely and in a well defined manner. In a letter, there are three parts i.e. the salutation, body and the conclusion. To make your letter effective, make sure that you write to the point and don’t go astray from the main point of concern. In the words of Pam Brown, “A friendship can weather most things and thrive in thin soil; but it needs a little mulch of letters and phone calls and small, silly presents every so often - just to save it from drying out completely.”
QUOTES
A letter from the heart may never be judged or graded, for it is the masterpiece of one's love.
Unknown
356 Likes
Letters quotes
Love quotes
Heart Touching quotes
Words quotes
Expression quotes
Sponsored Links

Letters are like kisses when you are not here!
Unknown
69 Likes
Boyfriend In Jail quotes
Letters quotes
You've sent my letters back and all my records and they're all scratched.
The Police
6 Likes
Letters quotes 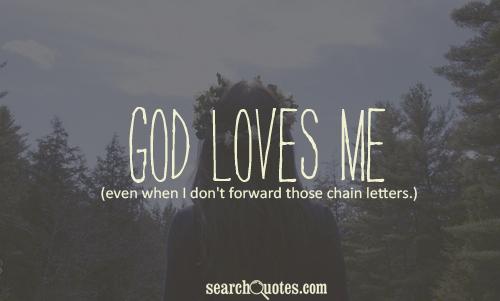 God loves me even when I don't forward those chain letters.
Unknown
2194 Likes
Funny Facebook Status quotes
Letters quotes
I wrote a letter to my dad, I was going to write 'I really enjoyed being here', but I accidentally wrote 'rarely' instead of 'really'. But I wanted to use it, I didn't want to cross it out, so I wrote 'I rarely drive steamboats, Dad. There's a lot of sh*t you don't know about me. Quit trying to act like I'm a steamboat operator.' I know this letter took a harsh turn right away.
Mitch Hedberg
18 Likes
Fathers quotes
Letters quotes
I wrote my friend a letter using a highlighting pen. But he could not read it, he thought I was trying to show him certain parts of a piece of paper.
Mitch Hedberg
5 Likes
Letters quotes
Sponsored Links

Thanks for your nice little note, though I am sorry to hear you find Through the Looking Glass so uninteresting. You see I have done my best, so it isn't really my fault if you think Tweedledum and Tweedledee stupid, and wish that I had left out all about the train and the gnat.
Lewis Carroll
30 Likes
Children quotes
Letters quotes
I've been keeping all the letters that I wrote to you. Each one a line or two: "I'm fine, baby. How are you?" I would send them, but I know that it's just not enough. My words are cold and flat, and you deserve more than that.
Michael Buble
18 Likes
Letters quotes
This is not a letter but my arms around you for a brief moment
Katherine Mansfield
5 Likes
Love quotes
Hugs quotes
Letters quotes
I wrote a letter to my dad, I was going to write 'I really enjoyed being here', but I accidentally wrote 'rarely' instead of 'really'. But I wanted to use it, I didn't want to cross it out, so I wrote 'I rarely drive steamboats, Dad. There's a lot of sh*t you don't know about me. Quit trying to act like I'm a steamboat operator.' I know this letter took a harsh turn right away.
Mitch Hedberg
16 Likes
Fathers quotes
Letters quotes
To find out your real opinion of someone, judge the impression you have when you first see a letter from them.
Arthur Schopenhauer
0 Likes
Letters quotes
Sponsored Links

I will never understand people who think that the way to show their righteous opposition to sexual freedom is to write letters full of filthy words.
Anna Quindlen
5 Likes
Letters quotes
If a man wishes to truly not be written about, he would do well not to write letters to 18-year-old girls, inviting them into his life.
Joyce Maynard
17 Likes
Letters quotes
Miracles are a retelling in small letters of the very same story which is written across the whole world in letters too large for some of us to see.
C S Lewis
8 Likes
Letters quotes
Temple was a man of the world amongst men of letters, a man of letters amongst men of the world.
Thomas B Macaulay
0 Likes
Letters quotes
If I loved all the world as I do you, I shouldn't write books to it: I should only write letters to it, and that would be only a clumsy stage on the way to entire telepathy.
Laurence Housman
3 Likes
Letters quotes
1 2
TRENDING
TRENDING TOPICS
May 26
Army Wife
Bad Karma
Being A Good Person
Best Friends Forever
Birthday
Body
Exam
Funny
Funny Lazy
Good New Year
Graduation Messages
Humor
Husband
Maturity
Meeting
Positive Affirmation
Reality
Secret Crush
Self Motivational
Step Mom
ABOUT Terms
Privacy Policy
Removal Request
Sitemap
Contact Us