click me
A good boss does not boss over his subordinates rather he makes the subordinates shoulder his responsibilities voluntarily. When this secret is realized by the superior boss the atmosphere become amicable and a good a place to work at. The employees enjoy their job. The greatest difference between the boss and has subordinates lies in the way a job is apraocehed.alanis morissette said that the person who knows HOW will always have a job and the person who knows WHY will always be his boss. At times, it may so happen that some of the employees always need a driving force like a boss to get the best out of them. They are like horses that are capable of more power if driven by the right force. Hence in such places a boss is the ultimate power to derive the best out of any job. There are both hilarious and taxing experiences with boss for many employees. Here are numerous quotes on boss.
QUOTES
To be a great boss you must be capable of showing respect to those that are in positions below you.
Sonya Parker
27 Likes
Boss quotes
Managers quotes
Leadership quotes
Respect quotes
Sponsored Links 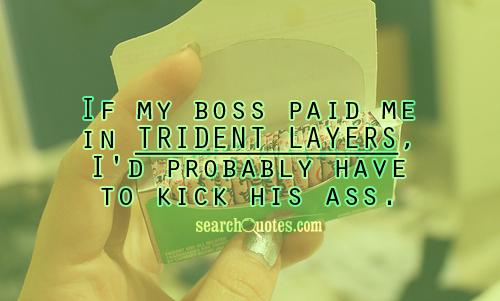 If my boss paid me in Trident Layers, I'd probably have to kick his ass.
Unknown
387 Likes
Funny Facebook Status quotes
Boss quotes
Work quotes
Employees quotes
Humor quotes
Encourage and reward your employees. Without them, you can do nothing. They help you accomplish your goals; now help them accomplish theirs.
Unknown
61 Likes
Employees quotes
Boss quotes
Work quotes
Goals quotes
Sponsored Links

A boss creates fear, a leader confidence. A boss fixes blame, a leader corrects mistakes. A boss knows all, a leader asks questions. A boss makes work drudgery, a leader makes it interesting.
Russell H Ewing
113 Likes
Bosses quotes
Boss quotes
"Can you not see that it is the INDUSTRIAL SYSTEM and not the "boss" which must be changed?"
Lucy Parsons
68 Likes
Boss quotes
Capitalism quotes 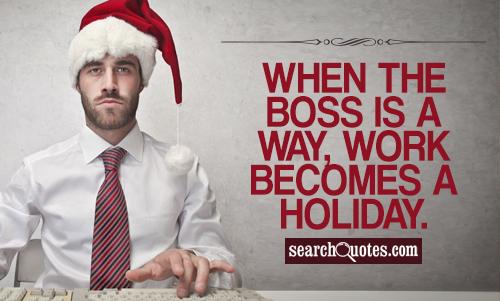