click me
Funerals are ceremonies to remember and sanctify the life of any dead person. The word “funeral” is derived from the Latin word “funus” which means corpse and funerary rights themselves. The origin of funeral rites dates back to the time of origin of the human culture. During funeral, the body of the decent is buried or cremated and people pay homage to the corpse of the departed soul. In the words of Irvin S. Cobb, “A funeral eulogy is a belated plea for the defence delivered after the evidence is all in.” Funerals are carried out in different ways, based on the religion of the deceased person. Some people call wedding a funeral in which you smell your own flowers. Ella R. Bloor, “I shall never forget the despair and agony on the parents' faces on the awful day of the funeral when the 13 little children, victims not only of John D. Rockefeller, but of the government of the state of Colorado were buried.”
QUOTES
Depressions may bring people closer to the church but so do funerals
Unknown
30 Likes
Depression quotes
Church quotes
Faith quotes
Funerals quotes
Sadness quotes
Sponsored Links

Your coffin reached the monstrous hole. And a part of me went down into the muddy earth with you and lay down next to you and died with you.
Rosamund Lupton
71 Likes
Funerals quotes
Death quotes
Loss quotes
Sadness quotes
Feeling Lonely quotes
How could you go about choosing something that would hold the half of your heart you had to bury?
Jodi Picoult
38 Likes
Funerals quotes
Loss quotes
Death quotes
Heartache quotes
Bereavement quotes
Too many funerals, not enough graduations. Too many babyshowers, not enough weddings.
Unknown
126 Likes
Life quotes
It Is What It Is quotes
Funerals quotes 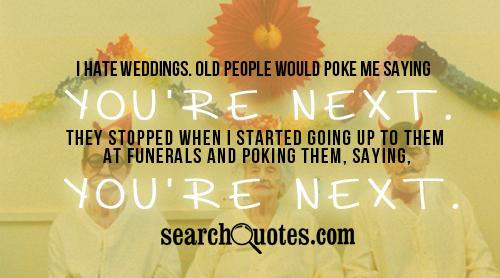 In our society any man who doesn't cry at his mother's funeral is liable to be condemned to death
Albert Camus
2 Likes
Funerals quotes
Write on my gravestone: Infidel, Traitor., infidel to every church that compromises with wrong; traitor to every government that oppresses the people.
Wendell Phillips
6 Likes
Writing quotes
Funerals quotes
Infidelity quotes
Spare me the whispering, crowded room, the friends who come and gape and go, the ceremonious air of gloom - all, which makes death a hideous show
Matthew Arnold
2 Likes
Funerals quotes
This is the epitaph I want on my tomb: Here lies one of the most intelligent animals who ever appeared on the face of the earth
Benito Mussolini
8 Likes
Funerals quotes
True friends appear less mov'd than counterfeit; As men that grieve at funerals are not so loud as those that cry for hire
Horace
0 Likes
Funerals quotes
Sponsored Links