click me
Silence is the state of being silent marked by entire absence of sound or noise, absolute stillness. It is the absence of any form of speech, quite synonymous with taciturnity or muteness. According to Philip brooks, “A man who lives right, and is right, has more power in his silence than another has by his words.” This very statement clearly implies that a man is very much known by the silence he keeps. Absolute silence however refers to sadness and is often symbolically called the image of death. Silence is observed to mourn for the departed soul. Silence can be used for expressing the inexpressible. Silence can make a fool appear wise in public. Silence is often taken as the inability to speak out. In an argument silence means acceptance. According to John Tillotson, “A good word is an easy obligation; but not to speak ill requires only our silence, which costs us nothing.”
QUOTES
If you are strong & talented, you do not need to run around and tell everyone about it. It speaks for itself. Work hard in silence. Let success make the noise.
DrAnil Kumar Sinha
22 Likes
Talent quotes
Being Strong quotes
Actions Speak Louder Than Words quotes
Hard Work quotes
Silence quotes
Success quotes
Sponsored Links 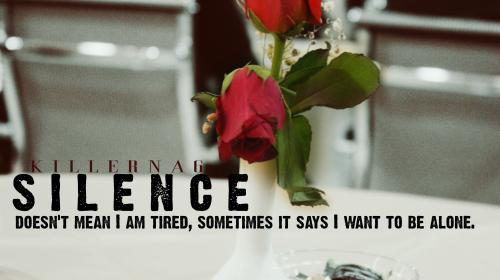 Sometimes,not saying anything is the best answer. You see, silence can never be misquoted.
Unknown
24 Likes
Silence quotes
Advice quotes
Words Of Wisdom quotes
We need to find God, and he cannot be found in noise and restlessness. God is the friend of silence. See how nature -- trees, flowers, grass -- grows in silence; see the stars, the moon and the sun, how they move in silence. We need silence to be able to touch souls.
Mother Teresa
25 Likes
God quotes
Silence quotes
Faith quotes
Belief quotes
Relationship With God quotes
Spirituality quotes
Sometimes silence is more powerful than words.
Unknown
8 Likes
Silence quotes
Power quotes
Words quotes
Quietness is an essential part of all awareness. In quiet times and sleepy times, a child can dwell in thoughts of his own, and in songs and stories of his own.
Unknown
7 Likes
Silence quotes
Life quotes
Awareness quotes
Thought quotes
Reflection quotes
Contemplation quotes
You know you have a best friend when you can sit in silence and just use facial expressions to communicate.
Unknown
23 Likes
Best Friend quotes
Silence quotes
Friendship quotes
True Friend quotes
Sponsored Links

Sometimes it's better to keep silent than to tell others what you feel because it will only hurt you when you know they can hear you but they can't understand.
Unknown
15 Likes
Silence quotes
Feelings quotes
Expression quotes
Hurt quotes
Don't conclude on a silent reply, it could mean anything.
Terry Mark
4 Likes
Silence quotes
Meaning quotes
Judgment quotes
Advice quotes
Most people don't get scared straight, they get scared silent.
Andrew Cervantes
11 Likes
Fear quotes
Silence quotes
Timidity quotes
I choose to love you in silence, for in silence I found no rejection, I choose to love you in my dreams, for in my dreams no one owns you but me.
Unknown
19 Likes
Poems quotes
Poetry quotes
Love quotes
Silence quotes
Dreams quotes
Silence is wisdom. Close your eyes and you will find more truth than what others say.
Jeremy Limn
46 Likes
Silence quotes
Wisdom quotes
Truth quotes
Words quotes
1 2 3 4 ... 19
TRENDING
TRENDING TOPICS
May 20
50th Anniversary
Bachelors
Being Hurt
Birthday Wishes
Borrowing
Deep Love
Equality
Funny
Funny Facebook Status
Graduation
Hater
Heart Touching
Islam
Jesus Christ
Keeping It Real
Long Distance Relationship
Love
Motivational
Power
School
ABOUT Terms
Privacy Policy
Removal Request
Sitemap
Contact Us