click me
Sons make not only the next generation but are also responsible to bring about a good progeny. Sons take up after their father and hence it is the responsibility of the father to raise their sons in the right way and environment. We very often see that sons resemble their father externally in features and also in the behavior, unintentionally. Occasionally the father tries to thrust his ideas and ambitions on his sons without knowing whether they like it or not. This is not a good gesture. An anonymous quote says, “your son at five is your master, at ten your slave, at fifteen your double and after that your friend or foe, depending on his bringing up”. So, the character and future of the sons solely depends upon his upbringing. This will be carried on from one generation to the next and the Talmud says, “When you teach your son, you teach your son’s son”. These compilations of quotes on sons are thought provoking and offer guidance. Read them.
QUOTES
I think there's a lot of moms who would be so disappointed if they knew how poorly their sons treated girls
Unknown
312 Likes
Moms quotes
Disappointment quotes
Being Disappointed quotes
Sons quotes
Girls quotes
Treatment quotes
Sponsored Links 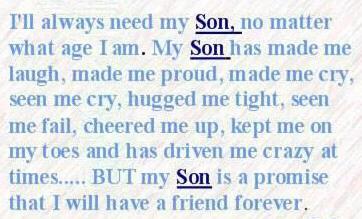 I will always need my Son, no matter what age I am. My son has made me laugh, made me proud, made me cry, seen me cry, hugged me tight, seen me fail, cheered me up, kept me on my toes, and at times driven me crazy, But my Son is a promise that I will have a friend FOREVER!
Andrew Guzaldo
467 Likes
Father Son quotes
Sons quotes
Family Love quotes
Longtime Friend quotes
Parents quotes
No love is greater than that of a father for His son.
Dan Brown
127 Likes
Sons quotes
Fathers quotes
Family Love quotes
You don't raise heroes, you raise sons. And if you treat them like sons, they'll turn out to be heroes, even if it's just in your own eyes.
Walter M Schirra
114 Likes
Sons quotes
Fathers quotes
Heroes quotes
Father Son quotes
Sponsored Links

I have a dream that one day on the red hills of Georgia, the sons of former slaves and the sons of former slave owners will be able to sit together at the table of brotherhood.
Martin Luther King Jr
20 Likes
Sons quotes
A son is a son till he takes him a wife, a daughter is a daughter all of her life.
Unknown
46 Likes
Marriage quotes
Family quotes
Sons quotes
Irish quotes 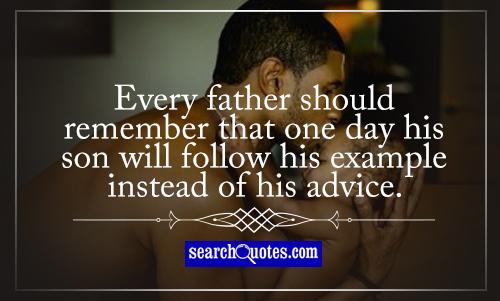