click me
Girls are the female gender and are known for their meek and docile character. Compared to guys, they are the weaker sex who have elegance of manner and are sophisticated in their looks and efforts. Mostly, all girls love to dress themselves like a princess and adorn trendy clothes. Jane Austen had remarked, “Give a girl an education and introduce her properly into the world, and ten to one but she has the means of settling well, without further expense to anybody.” The girl child should be respected and not killed in the womb. This practise is called infanticide and is unfortunately practised in many countries. Megan Fox had once remarked, “think people are born bisexual and the make subconscious choices based on the pressures of society. I have no question in my mind about being bisexual. But I'm also a hypocrite: I would never date a girl who is bisexual, because that means they also sleep with men, and men are so dirty that I'd never sleep with a girl who had slept with a man.”
QUOTES
The most difficult task is to study a girls's mind thoroughly.
Unknown
7 Likes
Girls quotes
Women quotes
Mind quotes
Difficulty quotes
Sponsored Links

Good girls are bad girls who never get caught.
Unknown
65 Likes
Being Good quotes
Pretending quotes
Girls quotes
Being Bad quotes
Funny quotes
The strongest actions for a woman is to love herself, be herself and shine amongst those who never believed she could.
Unknown
68 Likes
Girls quotes
Strength quotes
Strong Women quotes
Independent Women quotes
Love Yourself quotes
Self-love quotes
Every girl has that one boy she keeps going back to and no one knows why, not even her.
Unknown
63 Likes
Uncertainty quotes
Complicated Relationship quotes
Complicated Love quotes
Boys quotes
Girls quotes
Men And Women quotes
Getting Back Together quotes
Some girls want to be treated like Queens but they do not know how to be one.
Simphiwe Dumi
38 Likes
Girls quotes
Treatment quotes
Behavior quotes
Attitude quotes
Girls fall in love with funny guys. Personality catches the heart. Not looks.
Vionie Mae Didal
35 Likes
Girls quotes
Falling In Love quotes
Attraction quotes
Personality quotes
Heart quotes
Sense Of Humor quotes
Relationship Advice quotes
Appearance quotes
Sponsored Links

You are pretty. You are gorgeous. You are beautiful. You are flawless. You simply slay and no one can tell you different unless you let them.
Unknown
23 Likes
Girls quotes
Pretty quotes
Beautiful quotes
Uplifting quotes
Be Yourself quotes
Positive quotes
Encouraging quotes
Attention. That's all girls want. The best gift you can give to a girl is your devotion, not some Louboutins. But buy those if you're busy, for sure.
Unknown
30 Likes
Attention quotes
Jokes quotes
Advice quotes
Funny quotes
Girls quotes
Devotion quotes
Relationship Advice quotes 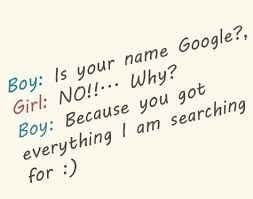 Boy: is your name Google?, Girl: No!!... Why? Boy: Because you got everything I am searching for
Unknown
130 Likes
Finding Love quotes
Teen Love quotes
Cute Love quotes
Funny quotes
Jokes quotes
Silly quotes
Boys quotes
Girls quotes
Crush quotes
All I Want Is You quotes
Every boy wants a good girl to be bad just for him. and every girl wants a bad boy to be good just for her.
Unknown
47 Likes
Lovers quotes
Complicated Love quotes
Goodness quotes
Being Bad quotes
Relationship quotes
Men And Women quotes
Girls quotes
Boys quotes
Every girl is beautiful in every single way, because she already have the amazing personalities that God has given her that makes her really beautiful. Because every girl is not measured on how she looks, but it's what she has within her.
Unknown
61 Likes
Girls quotes
Beauty quotes
Beautiful quotes
Personality quotes
Pretty quotes
God quotes
Inner Beauty quotes
Sponsored Links