click me
A bad girl can be defined as a female member of the human species that acts as they want to act, fearing no consequences or repercussions. A bad girl is a girl that may or may not be sexually promiscuous, and doesn’t mind or care about if people think that she is. A bad girl simply doesn’t care about a person’s feelings or what anyone else thinks, but is instead only concerned with receiving the things that her heart may desire. The term bad girl does not always refer to a woman who breaks hearts, but also may refer to a woman that breaks the law with no concern or fear of being in trouble for doing so. At the essence of every bad girl may be a girl who means well, or knows no better, but is a girl with disregard or naivety to a belief or set of morals. Bad girls are synonymous with any famous celebrity women who go against the norm and do things that many people haven’t seen women do.
QUOTES
The whole 'bad girl' thing allows me to mess up sometimes. And I have freedom to say more of what I want to.
Ronda Rousey
5 Likes
Bad Girl quotes
Being Bad quotes
Making Mistakes quotes
Freedom quotes
Free Will quotes
Sponsored Links 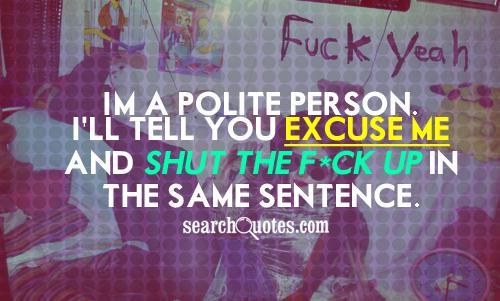