click me
Compromise is to agree to the conditions of another party, when one has no other alternative left. Compromise has to be made at several stages of one's lifetime. Compromise is nothing but a sort of an adjustment that you have to make so as to live life smoothly, without any upheavals. Give and take is a part of each compromise. Compromise is a mutual agreement between any two people or parties. In the words of Mahatma Gandhi, "All compromise is based on give and take, but there can be no give and take on fundamentals. Any compromise on mere fundamentals is surrender, for; it is only give and no take." So, when you stand and support the right, and you are being denied justice, then make no compromises. It will be as if you have given up or yielded. Compromise with moral and ethics at stake is not worth it.
QUOTES
Take into account the things that people do and compromise for you. You don't know what they went through to try and contribute to your happiness. Be grateful.
Tshepo Koos Maluleke
15 Likes
Compromise quotes
Being Grateful quotes
Being Thankful quotes
Appreciation quotes
Happiness quotes
Sponsored Links

Healthy relationships are built on COMPROMISE. But it takes work on each persons part to make sure that there is enough exchange of emotions and feelings in relationship.
Anurag Prakash Ray
11 Likes
Relationships quotes
Compromise quotes
Hard Work quotes
Emotions quotes
Feelings quotes
With the technology in use today ,gaps have been bridged and distances have been closed. But we have compromised on the handshake,the hugs and those kisses and we cant say a thing because we have become a part of the revolution.
Hermann J Steinherr
0 Likes
Technology quotes
Affection quotes
Humanity quotes
Communication quotes
Revolution quotes
Compromise quotes
Sacrifice quotes
Some build mountains ahead of their journeys, others build bridges instead.
Terry Mark
5 Likes
Life quotes
Life Journey quotes
Compromise quotes
Inspiring quotes
Compromising, of course, is a choice. You either choose to make it work or you choose not to. I believe this fully. As long as something doesn't go against your nature, over time you can make it work. But there are still some cases when compromising isn't enough.
Unknown
4 Likes
Compromise quotes
Choice quotes
Relationship quotes
Improvement quotes
Time quotes
Change quotes
Sometimes, peace is better than being right.
Unknown
10 Likes
Peace quotes
Right quotes
Compromise quotes
Making Amends quotes
Sponsored Links 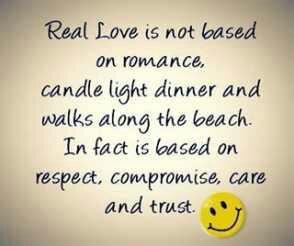 Real love is not based on romance, candle light dinner, walk along the beach- in fact based upon the respect, compromise, care and trust.
Unknown
308 Likes
True Love quotes
Caring quotes
Respect quotes
Compromise quotes
Caring quotes
Trust quotes
Romance quotes
Be original, be yourself. In trying to become like someone else, we are compromising our own self being. If we are not satisfied with our own self, can not find satisfaction anywhere. We should learn to keep our own self happy and remain happy under all circumstances in life. The key to being happy is a non-insisting mind, non-complaining mind, and a pure mind.
Anil Sinha
30 Likes
Originality quotes
Be Yourself quotes
Compromise quotes
Identity quotes
Self quotes
Satisfaction quotes
Contentment quotes
Self Happiness quotes
Loneliness is no excuse for compromise. Be comfortable with yourself before you choose to be with someone else just to avoid being alone.
Unknown
65 Likes
Loneliness quotes
Being Lonely quotes
Being Alone quotes
Advice quotes
Excuses quotes
Compromise quotes
Be Yourself quotes
Being Who You Are quotes
Relationship Advice quotes
1 2 3 4 ... 6
TRENDING
TRENDING TOPICS
May 20
All I Want Is You
Ambitious
Attitude
Believe In Yourself
Blessings
Compliments
Disappointed Love
Family
Funny
Goals
Graduation
Letting Go
Life
Life In General
Live Fast
Love
Morning
Ride Or Die
True Beauty
Wishes
ABOUT Terms
Privacy Policy
Removal Request
Sitemap
Contact Us