click me
Diplomacy is the art of conducting negotiations between representatives or heads of various countries. Diplomat is a person who is extremely diplomatic. Diplomacy is the art or skill of securing advantages. International treaties are firstly negotiated by diplomats before being signed and endorsed by politicians. According to Daniel Pipes, “Diplomacy in general does not resolve conflicts. Wars end not due to peace processes, but due to one side giving up.” Some sciences define diplomacy as the use of tactful procedures to gain advantage and others define it as the art of finding mutually agreed upon solutions which are facing a common challenge. The process of diplomatic getting its name from the “diplomacy” is an entirely different process all together. According to Bo Bennett, “Diplomacy is more than saying or doing the right things at the right time, it is avoiding saying or doing the wrong things at any time.”
QUOTES
Diplomacy is the art of sending someone to hell in the way that they are looking forward to it.
Unknown
82 Likes
Diplomacy quotes
Funny quotes
Humor quotes
Hell quotes
Talent quotes
Sponsored Links 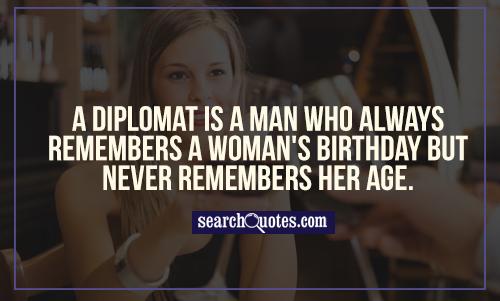 Diplomats are useful only in fair weather. As soon as it rains they drown in every drop.
Charles De Gaulle
3 Likes
Diplomacy quotes
There are few ironclad rules of diplomacy but to one there is no exception. When an official reports that talks were useful, it can safely be concluded that nothing was accomplished.
John Kenneth Galbraith
3 Likes
Diplomacy quotes
Diplomacy is a disguised war, in which states seek to gain by barter and intrigue, by the cleverness of arts, the objectives which they would have to gain more clumsily by means of war.
Randolph Bourne
6 Likes
Consequences quotes
Diplomacy quotes
A lover tries to stand in well with the pet dog of the house.
Moliere
2 Likes
Love quotes
Diplomacy quotes
To say nothing, especially when speaking, is half the art of diplomacy.
Will Durant
9 Likes
Diplomacy quotes
1 2 3
TRENDING
TRENDING TOPICS
Sep 26
Being Blessed
Being Loved
Broken Love
Broken Trust
Cowardice
Fake Relationship
Falling In Love
Falling Out Of Love
Funny
Happiness
Happy Birthday
Highschool
Holding On
Hospitality
Marine Wife
Relationship Advice
Self-sacrifice
Strength
Weakness
Weather
ABOUT Terms
Privacy Policy
Removal Request
Sitemap
Contact Us