click me
The ending is the end or final part of some event or process, which is about to come to a halt. The ending marks the final stage of something. All is well that ends well. A hard beginning makes a good ending. People generally concentrate on beginning and ending a task, well. In films, dramas or plays, a proper ending does a lot of good for the film. Some romantic films always have a candy-floss ending. All good things come to an end. In the words of Conrad Aiken, “All lovely things will have an ending, all lovely things will fade and die; And youth that’s now so bravely spending, will beg a penny by and by.” Ending should always be on a positive note and leave a great and indelible impact on our minds. Ending should be well-planned and decided, in advance. Otherwise, ending would be abrupt and improper, much to the dislike of all and sundry.
QUOTES
All stories come to an end to pave way for new ones, but sometimes new stories start from old endings.
Hermann J Steinherr
11 Likes
Life quotes
New Beginnings quotes
Ending quotes
Life Lesson quotes
Sponsored Links 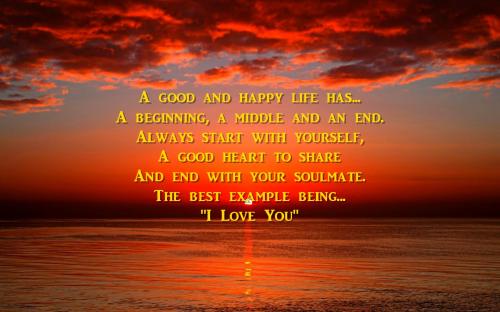 A good And happy life has... A beginning, A middle And an end. Always start with yourself, A good heart to share And ending with your destiny. The best example being... I love you.
Nghi Lam
30 Likes
Love quotes
Life quotes
I Love You quotes
Poems quotes
Beginning quotes
Ending quotes
Life Journey quotes
Sponsored Links