click me
The word “interest” can be interpreted in two ways. Interest is the experience or feeling of any person whose attention, curiosity and imagination has been caught up by something or someone. When you become too engaged in something or someone, you are then said to be interested in that person or thing. Interest in the task or work at hand always maximizes efficiency and leads to fruitful results. T.S. Eliot had once remarked, “Half of the harm that is done in this world is due to people who want to feel important. They don't mean to do harm. But the harm does not interest them.” Interest is the fee paid on borrowed money. It is the price paid for use of borrowed money or the money earned from deposited funds. In a metaphorical tone, George Washington had once remarked, “Worry is the interest paid by those who borrow trouble.”
QUOTES
Love builds upon sincere foundations of long lasting interests and continues to flourish if nurtured and cared for.
Hermann J Steinherr
4 Likes
Love quotes
Sincerity quotes
Interest quotes
Cherish quotes
Caring quotes
Sponsored Links 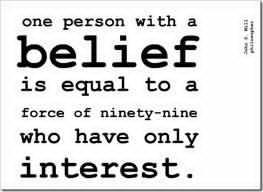 One person with a belief is equal to force of ninety-nine who have only one interest.
John Stuart Mill
15 Likes
Beliefs quotes
Conviction quotes
Interest quotes
Words Of Wisdom quotes
Sponsored Links

Work without interest is imprisonment. Even if you aren't super-passionate about your work, you've got to at least be interested in it. When you design a lifestyle in which your work is something you suffer through daily strictly to pay your bills, you end up spending your entire life wishing you had someone else's.
Melchor Lim
13 Likes
Work quotes
Interest quotes
Passion quotes
Life quotes
Suffering quotes
Bitterness quotes
Do remember, you're not alone. Whatever your beliefs and interests and problems, there are others who share them - possibly many people - and probably not that far away. The challenge is to find them.
Senora Roy
25 Likes
Being Alone quotes
Beliefs quotes
Interest quotes
Problems quotes
Sharing quotes
Life quotes
You can change your hobbies, but you can't change your interests. You can change who you say you care about, but you can't change who really cares about you.
Melchor Lim
17 Likes
Change quotes
Influence quotes
Control quotes
Caring quotes
Interest quotes
Life quotes
Passion ignites love and keeps it alive. Lasting passion does not come through physical attraction alone. It comes from deep commitment, enthusiasm, interest and excitement. The essence of love and happiness are the same, all we need to do is to live each day with passion.
Bernajoy Vaal
27 Likes
Passion quotes
Relationship Advice quotes
Love Advice quotes
Commitment quotes
Enthusiasm quotes
Excitement quotes
Interest quotes
Being In Love quotes
Happiness quotes
If you have a passion or interest don't be afraid of what other people think and say. Don't stop believing yourself
Ritu Ghatourey
23 Likes
Passion quotes
Interest quotes
Never Back Down quotes
Fear quotes
Believe In Yourself quotes
Self-esteem quotes
Self-confidence quotes
1 2 3
TRENDING
TRENDING TOPICS
May 16
Being Who You Are
Birthday
Birthday Wishes
Classy Women
Deadbeat Dad
Friends
Happy Birthday
Life
Little Brother
Loyalty
Maturity
Rap
Secret Love
Short
Sister
Sorority
Support
Thank You
Tomorrow
Women
ABOUT Terms
Privacy Policy
Removal Request
Sitemap
Contact Us