click me
Labor is the US spelling of the word “labour”. The word has different interpretations. Labour means a group of workers or in more general terms, a workforce. Labour means to work hard with great dedication and hardcore efforts. People who put in lots of effort and labour in their work are laborious people. There is no substitute for hard work and labour. Labour Party is a left-wing political part formed to represent the ordinary working people. The Labour Party is not a debating club, but it is a party of action. David Ricardo had once remarked, “A rise of wages from this cause will, indeed, be invariably accompanied by a rise in the price of commodities; but in such cases, it will be found that labour and all commodities have not varied in regard to each other, and that the variation has been confined to money.” Another interpretation of the word “labour” also exists. Labour also refers to the process of childbirth.
QUOTES
Love's labor never gets lost, it just finds its way to places we fail to see.
Unknown
126 Likes
Love quotes
Labor quotes
Complicated Love quotes
Finding Love quotes
Sponsored Links

No power is strong enough to be lasting if it labors under the weight of fear.
Unknown
20 Likes
Labor quotes
Fear quotes
Power quotes
Strength quotes 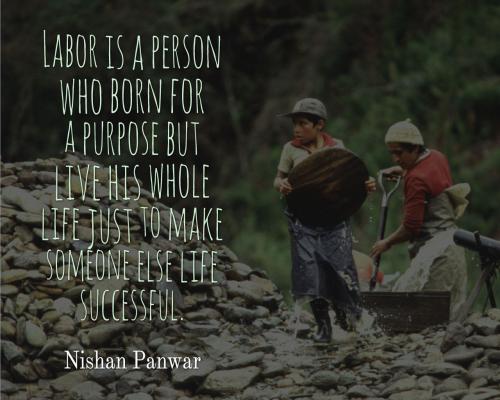 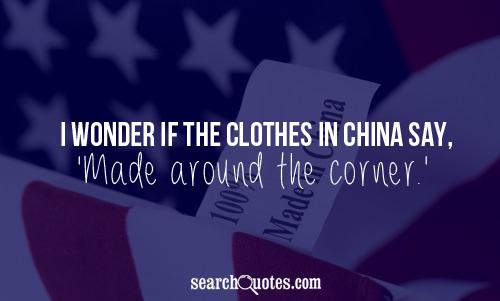 I wonder if the clothes in China say, 'Made around the corner.'
Unknown
919 Likes
Funny Facebook Status quotes
Clever Facebook Status quotes
Clothes quotes
Labor quotes
Funny Fashion quotes
No matter how much falls on us, we keep plowing ahead. That's the only way to keep the roads clear.
Greg Kincaid
15 Likes
Practice quotes
Endurance quotes
Persistence quotes
Inspirational quotes
Labor quotes
Only a fool would try to deprive working men and working women of their right to join the union of their choice.
Dwight D Eisenhower
11 Likes
Labor quotes
When we talk about equal pay for equal work, women in the workplace are beginning to catch up. If we keep going at this current rate, we will achieve full equality in about 475 years. I don't know about you, but I can't wait that long.
Lya Sorano
29 Likes
Labor quotes
Equality quotes
Feminism quotes
Justice quotes
Patients quotes
Work quotes
Feminist quotes
The strongest bond of human sympathy outside the family relation should be one uniting working people of all nations and tongues and kindreds.
Abraham Lincoln
14 Likes
Labor quotes
Community quotes
Sponsored Links

Labor is work that leaves no trace behind it when it is finished, or if it does, as in the case of the tilled field, this product of human activity requires still more labor, incessant, tireless labor, to maintain its identity as a ''work'' of man.
Mary McCarthy
2 Likes
Labor quotes
. . . when the farm workers strike and their strike is successful, the employers go to Mexico and have unlimited, unrestricted use of illegal alien strikebreakers to break the strike. And, for over 30 years, the Immigration and Naturalization Service has looked the other way and assisted in the strikebreaking. I do not remember one single instance in 30 years where the Immigration Service has removed strikebreakers. . . .The employers use professional smugglers to recruit and transport human contraband across the Mexican border for the specific act of strikebreaking . . .
Cesar Chavez
28 Likes
Labor quotes
LABOR PAINS BUT PAYS.
PANDIT MUSTAFA ARIF
22 Likes
Labor quotes
If, in the present chaotic and shameful struggle for existence, when organized society offers a premium on greed, cruelty, and deceit, men can be found who stand aloof and almost alone in their determination to work for good rather than gold, who suffer want and persecution rather than desert principle, who can bravely walk to the scaffold for the good they can do humanity, what may we expect from men when freed from the grinding necessity of selling the better part of themselves for bread?
Lucy Parsons
11 Likes
Humanity quotes
Labor quotes
Work is the source of nearly all the misery in the world. Almost any evil you'd care to name comes from working or from living in a world designed for work. In order to stop suffering, we have to stop working.
Bob Black
15 Likes
Work quotes
Suffering quotes
Misery quotes
Labor quotes
1 2 3
TRENDING
TRENDING TOPICS
May 28
50th Wedding Anniversary
Appreciate Life
Birthday Wishes
College
Funny
Funny Facebook Status
Good Morning
Graduation
Happiness
Happy Married Life
Inspiration
Life
Lying
Memories
Past
Self-Confidence
Students
Summertime
Wife
Women
ABOUT Terms
Privacy Policy
Removal Request
Sitemap
Contact Us