click me
Though the word race has the more explicit meaning of a contest or a competition, it is used in the context of an ethnic group of a nation today. There is still a lot of discrimination in some part of the world on the basis of the skin color, birth and nationality. Such difference in the races are a blow to the entire humanity because after all, we belong to the one entire human race and all other differences have cropped up in between by the power hungry people. Martin Luther king was one such leader who fought for the freedom of African- Americans and his fight was against discrimination based on the race. He said, “I have a dream that my four little children will one day live in nation where they will not be judged by the color of the skin but by the content of their character”. These words are a blow to the so called upper race and let us come to terms with reality. Race is artificial, man made and emotional.
QUOTES
The makeup of a human being's self-esteem, self-image and self-concept, is not only based upon one's family history but also one's racial history.
Dr Umar Abdullah Johnson
50 Likes
Self-esteem quotes
History quotes
Race quotes
Family quotes
Sponsored Links

We people are different from each other not because of our religion or race but by our choices and the decisions we make.
Anurag Prakash Ray
12 Likes
People quotes
Choices quotes
Uniqueness quotes
Being Different quotes
Religion quotes
Race quotes
Diversity quotes
No matter what color of skin you are. You're Special, fortunate and born for the right reason!
Unknown
12 Likes
Race quotes
Diversity quotes
Equality quotes
Life quotes
Uplifting quotes
No matter what race we are in this world, we are all the same color inside.
Alton Gatling Jr
15 Likes
Equality quotes
Race quotes
Humanity quotes
Mankind quotes
Life is not a Race, but we still continue the Chase and try to be an Ace. It's time to get out of this Maze and Truly Live with Grace.
Unknown
10 Likes
Life quotes
Race quotes
Competition quotes
Living quotes
Grace quotes
Motivational quotes
Life Journey quotes
Sponsored Links

Love has no eyes, Love has no age, Love has no culture nor religion, Love has no disability, Love has no gender nor race. It only takes two crazy individuals to make it happen.
London Mond
177 Likes
Love quotes
Culture quotes
Race quotes
Age quotes
Life quotes
Unconditional Love quotes
Being In Love quotes
A race of people is like an individual man; until it uses its own talent, takes pride in its own history, expresses its own culture, affirms its own selfhood, it can never fulfill itself.
Malcom X
20 Likes
Inspirational quotes
Individuality quotes
History quotes
Culture quotes
Race quotes
Pride quotes
Talent quotes
Fulfillment quotes
I have learned to master the art of being different and to prove that it has nothing to do with the color of my skin. Color is irrelevant.
Unknown
70 Likes
Being Different quotes
Race quotes
Self-mastery quotes
Im Me quotes
Being Myself quotes
Judging someone by the color of their skin is ignorant. Their skin complexion has nothing to do with their morals, beliefs or intelligence.
Savannah Smith
47 Likes
Racism quotes
Race quotes
Discrimination quotes
Judgment quotes
Criticism quotes
Bigotry quotes
Prejudice quotes
Don't waste your time on jealousy. Sometimes you're ahead and sometimes you're behind. The race is long and, in the end, it's only with yourself.
Unknown
44 Likes
Time quotes
Jealousy quotes
Life quotes
Competition quotes
Race quotes
Self quotes
Life Journey quotes
Sponsored Links

The Most Determinative And Motivating Sentence Which Should Always Be Followed In Life. The Race Is Not Over Because I Have Not Won Yet.
Ritu Ghatourey
22 Likes
Motivational quotes
Determinism quotes
Race quotes
Winning quotes
Never Give Up quotes
Encouragement quotes
Don't judge an entire race by the actions of a few people.
Sonya Parker
19 Likes
Judgment quotes
Race quotes
Actions quotes
Perception quotes
Love one another regardless of Religion and the Colour of your skin because Love is the Key to a Better World..
Mustapha Falalu Bello
38 Likes
Religion quotes
Race quotes
Unconditional Love quotes
Community quotes
Being In Love quotes
I Find a bit disturbing how some of you put all men of color into one category and refuse to date an entire race of men because of what you hear on the radio and what you see on television. Not all of us are like that. Wake up.
Unknown
60 Likes
Race quotes
Men And Women quotes
Judgement quotes
Reputation quotes
Equality quotes
The most common phrase in China: 'Hey! You look familiar!'
Unknown
226 Likes
Funny Facebook Status quotes
Race quotes
Sponsored Links 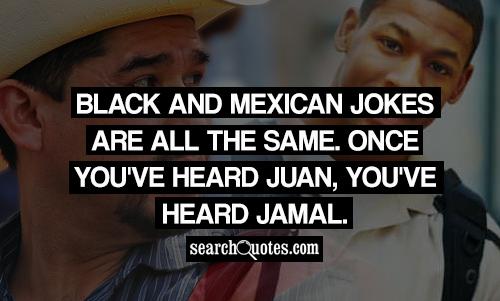