click me
Voting is the basic right of democracy and gives the voter an opportunity to select a leader of his or her choice. It is a very crucial and powerful right that has to be exercised rightly. “Vote for the man who promises least. He will be the least disappointing” says Bernard Baruch. The only criterion for voting is the age limit and not any other like the social status, money or education. Hence it forms the majority of the population. No one is to poor to vote. There are a frustrated lot who think that the political leaders in power cannot do any good for the society and thus they do not exercise their franchise. But this is a wrong notion because by abstaining from voting, it would not change the fate of the country. Vote is the instrument and symbol of a free mans power . Read the quotes on voting and they tell you the power of voting
QUOTES 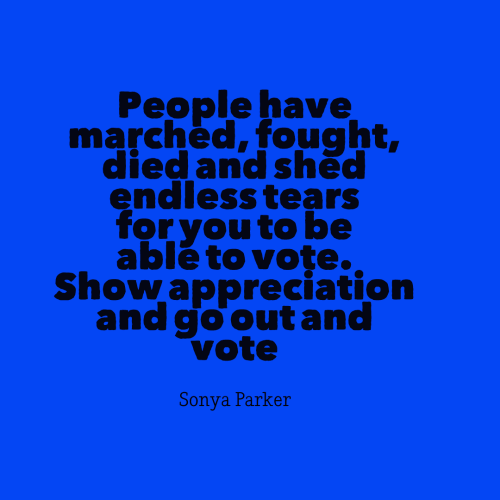 If you dislike both candidates vote for the one that you dislike the least. If you don't vote the one you dislike the most might win.
Sonya Parker
0 Likes
Voting quotes
Presidency quotes
Politics quotes
Political Leaders quotes
Elections quotes
Elected Officials quotes
Elections belong to the people. It's their decision. If they decide to turn their back on the fire and burn their behinds, then they will just have to sit on their blisters.
Abraham Lincoln
56 Likes
Voting quotes
Vote Wisely quotes
The Liberal Party of Canada, heading into an election, at the last minute they always stand up and they say: We know there's people out there that want to vote NDP and God love you. But if you vote for them you're throwing your vote away.
Rick Mercer
9 Likes
Politics quotes
Voting quotes
Do the unexpected. Take 20 minutes out of your day, do what young people all over the world are dying to do: vote.
Rick Mercer
18 Likes
Voting quotes
Sponsored Links

Voters quickly forget what a man says.
Richard M Nixon
3 Likes
Voting quotes
Suffrage, noun. Expression of opinion by means of a ballot. The right of suffrage (which is held to be both a privilege and a duty) means, as commonly interpreted, the right to vote for the man of another man's choice, and is highly prized.
Ambrose Bierce
160 Likes
Voting quotes
Vote Wisely quotes
The vote demonstrates that we accept the notion that all human beings are created in the image of God and have an equal right to preach and teach the word of God.
Alexander M Shapiro
154 Likes
Voting quotes
Vote Wisely quotes
Votes should be weighed, not counted
Friedrich Von Schiller
3 Likes
Voting quotes
Voting is a civic sacrament.
Theodore Hesburgh
4 Likes
Voting quotes
1 2 3
TRENDING
TRENDING TOPICS
Aug 13
Baseball
Being Kind
Birthday
Birthday Wishes
Conformity
Disney
Drinking
Farewell
First Time Mom
Internet
Legends
Letting Go
Love
Mistakes
Myself
Senses
Sorrow
Spirit
The Bible
True Friend
ABOUT Terms
Privacy Policy
Removal Request
Sitemap
Contact Us