click me
Drama queen is a term which is used for a female who behaves in an extremely dramatic manner so as grab everyone’s attention and hog the limelight. Someone who is a drama queen gets angry at the most paltry issues. According to Amy Lee, “I was always a drama queen. I remember playing in the kitchen, trying to get my mom to think I was dead and call the police. When she didn't, I would cry. I was always theatrical. I don't think any of my relatives are surprised.” The term drama queen is also used for a male who has effeminate characteristics and speaks in an overly dramatic manner so as to garner great attention. A confession of a drama queen is a famous teen novel which came out in the year 1999. Thereafter, the movie “confessions of a drama queen” starring Lindsay Lohan was released in the year 2004. Megan Fox had remarked, “I didn't get along with Lindsay Lohan on 'Confessions of a Teenage Drama Queen', but you have to consider that we were 16-year-old girls. I haven't seen Lindsay since then, but I imagine she's grown and become a different person. I know I have.”
QUOTES
Just because some people are fueled by drama doesn't mean you have to attend the performance.
Cheryl Richardson
37 Likes
Drama quotes
Drama Queen quotes
Negative People quotes
Advice quotes
Sponsored Links 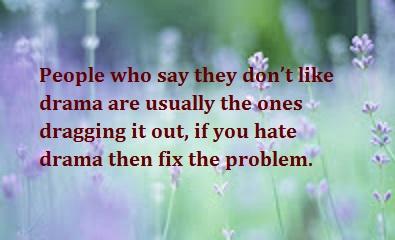 People who say they dont like drama are usually the ones dragging it out, if you hate drama then fix the problem.
Unknown
61 Likes
Drama quotes
People quotes
Drama Queen quotes
Conflict quotes
Problems quotes
It's ironic that the people who complain about drama are the ones who fuel the fire with it; Simple solution to drama - keep your mouth shut!
Nishan Panwar
116 Likes
Drama quotes
Drama Queen quotes
Solution quotes
Sponsored Links 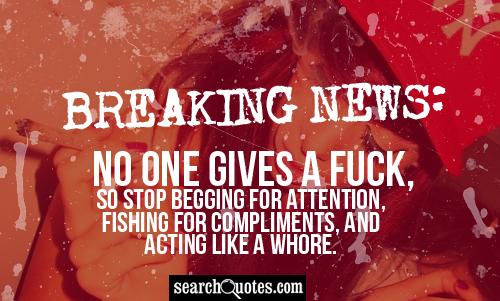 BREAKING NEWS: No one gives a fu.., so stop begging for attention, fishing for compliments, and acting like a whore.
Unknown
256 Likes
Hoes quotes
Attention quotes
Idgaf quotes
Who Cares quotes
Bitches quotes
Drama Queen quotes
Just because someone invites you to drama, does not mean you have to RSVP.
Unknown
57 Likes
Drama quotes
Drama Queen quotes
Karma quotes
Bad Karma quotes
With everything going on in this world. All the people with hate in their hearts, and minds, and still the focal point is the lies about me. You've made a mistake by messing with someone, who doesn't give a crap what you say. Here's my message, hear me out. I'm only saying this once. I don't give a sh.. about your insecurities. Your attempts to get my attention doesn't bother me, but when you crossed that line and dragged my name through the dirt, believe me girl you're gonna feel all my hurt. I work hard for the things that are in my hands. You seem to think that the scene you've made will somehow,some way cause me so much pain. I don't think you understand all your lies and shenanigans won't make me give a damn. It's all just a freaking scam. So I'll keep on living and keep on giving. We got one life to live, I won't be stopped with all your fibbing!
Unknown
165 Likes
Hatred quotes
Drama Queen quotes
Hurt Feelings quotes
Stop Hating quotes
Haters quotes
Who Cares quotes
Over It quotes
1 2 3
TRENDING
TRENDING TOPICS
Jan 18
Bad Relationship
Being Hurt By Someone You Love
Being Sad
Best Friend
Birthday Wishes
Courage
Dating
Daughter Birthday
Drama
Feelings
Good Morning
Love Advice
Lying
Mood
New Day
New Relationship
Sadness
Sisters
Song Lyrics
Success
ABOUT Terms
Privacy Policy
Removal Request
Sitemap
Contact Us