click me
The status of being a princess is a great feeling and an envious one too. Those who view it from outside, will long to be a princess, and of the opinion that they are the luckiest in the world. But they are also women and humans who too have feelings, wishes and ambitions that are not fulfilled. Jennie Jerome Churchill, who was the mother of Winston Churchill once said, “You may be the princess or the richest woman in the world but you cannot be more than a lady”. The pomp, the respect, the adulation, and the privilege of a princess will all boil down to the fact that she is a woman or a mother when it comes to the personal life. Take the instance of Princess Diana who was adored by the people of the world but she was contended to be the proud mother of two sons and was a family loving princess. She always wanted to help the needy and the sick and found solace and satisfaction in public service. This is the other side of princess. Read these quotes which throw light on the life of princess.
QUOTES
Sometimes being a SISTER is even better than being a PRINCESS.
Unknown
26 Likes
Sister quotes
Family Love quotes
Sibling Love quotes
Princess quotes
Family quotes
Sponsored Links

Behaving like a princess is work. It's not looking beautiful or wearing a crown. It's more about how you are inside.
Julie Andrews
15 Likes
Character quotes
Princess quotes
Behavior quotes
Hard Work quotes
She believed in dreams all right, but she also believe in doing something about them... When her prince charming didn't came along, she went over to the palace and got him.
Walt Disney
208 Likes
Belief quotes
Dreams quotes
Faith quotes
Disney quotes
Strong Women quotes
Independent Women quotes
Finding Love quotes
Princess quotes
Being Confident quotes
She said she wanted a fairy tale life with me, so I treated her like a Princess. I wanted a real life with her, but she treated me like a Jester. Apparently, I WAS the Fool.
Unknown
374 Likes
Heartbroken quotes
Unrequited Love quotes
Princess quotes
Fool quotes
Being Hurt By Someone You Love quotes
Disappointed Love quotes
Keep your head up, don't let your tiara fall because princess this is your life, live it the way you want to live it, don't let anyone negative get in your way.
Unknown
111 Likes
Uplifting quotes
Stay Strong quotes
Encouragement quotes
Princess quotes
Positivity quotes
Motivational quotes
Sponsored Links

A princess always takes care that her words are honeyed, for she may have to eat them.
Unknown
78 Likes
Princess quotes
Think Before You Speak quotes
Being Careful quotes
When a man who treats his woman like a princess, it is proof that he has been raised by a queen.
Unknown
339 Likes
Life quotes
Men And Women quotes
Growing Up quotes
Princess quotes
A Real Man quotes
Being A Man quotes
Relationship quotes
Proof quotes
Grow up princess! You are responsible for your own life. No one makes your decisions so stop blaming the world and take responsibility!
Marina Hanna
79 Likes
Princess quotes
Growth quotes
Responsibility quotes
Making Decisions quotes
Faults quotes
I'll start treating you like a princess as soon as you start acting like one.
Isaiah Harden
81 Likes
Actions quotes
Behavior quotes
Princess quotes
Treatment quotes 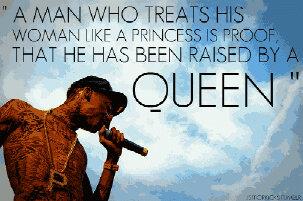 A man who treats his woman like a princess is proof that he has been raised by a queen.
Wiz Khalifa
795 Likes
Mother quotes
Being A Man quotes
A Real Man quotes
Relationship quotes
Princess quotes
Proof quotes
Sponsored Links

You may be a princess or the richest woman in the world, but you cannot be more than a lady.
Jennie Churchill
18 Likes
Princess quotes
There's nobody in the world like me. I think every decade has an iconic blonde, like Marilyn Monroe or Princess Diana and, right now, I'm that icon.
Paris Hilton
16 Likes
Princess quotes
The King's son, who was told that a great princess, whom nobody knew, was come, ran out to receive her. He gave her his hand as she alighted from the coach, and led her into the hall where the company were assembled.
Charles Perrault
6 Likes
Princess quotes
On one night of my debut the Prince of Wales, the Princess, and the duchess of London came to see me. They loved me for what I was and what I gave them.
Lillie Langtry
18 Likes
Princess quotes
Oh, I have to say Romana; she was much more fun to do but I did enjoy the Princess when she was turning bad.
Lalla Ward
4 Likes
Princess quotes
1 2
TRENDING
TRENDING TOPICS
Jun 27
Being A Good Person
Being Happy
Careers
Deep Love
Dont Trust Nobody
Falling In Love
Friendship
Girl
Goals
Gratitude
Greed
I Really Like You
Independence
Journalism
Life
Marxism
Motivation
Philosophy
Secret Love
Smile
ABOUT Terms
Privacy Policy
Removal Request
Sitemap
Contact Us