click me
Rap is basically the spoken or chanted rhythmic lyrics and has gained huge popularity of late. The beat that goes along with rap is the attention catching significance of rap. Rap is made use of in song, prose and poetry too and has become a huge hit, thanks to the rhythmic selection of words. But today, rapping is very often associated with hip hop music and the youth are dragged to rap music easier and faster. Tupic sahkur is one such celerity who has enjoyed a good status in rapping. There are numerous sings and quotes given out by him “unless we share with each other, we gotta start making changes”. Rap has come here to stay because even a child is attracted toward rap due to sheer attraction of the rhythmic usage of words. Kanye West says, “ I rap in such a way where the hood can respect it but I can sit in front of a white executive and spit the exact same verse and he’ll understand at least eighty percent of it “. Read these quotes on rap and enjoy.
QUOTES 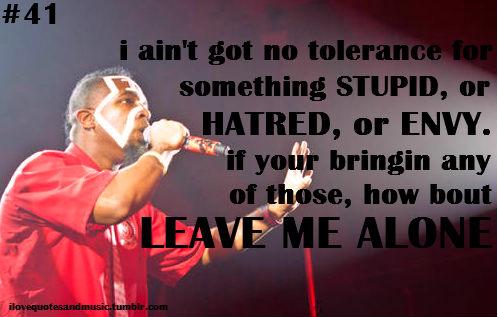 I ain't got no tolerance for something stupid, or hatred, or envy if your bringin any of those, LEAVE ME ALONE.
Tech N9ne
18 Likes
Leave Me Alone quotes
Hatred quotes
Stupidity quotes
Rap quotes
Envy quotes
Sponsored Links 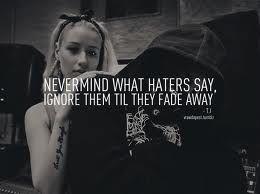 Never mind what haters say, ignore them till they fade away.
Iggy Azalea
24 Likes
Haters quotes
Negative People quotes
Stop Caring quotes
Rap quotes
Celebrity quotes
Teen quotes
One man's trash is another man's treasure. When one man find pain, one will find pleasure. I don't care about who was here before me the only thing that matters is if you are here with me now
Nelly
21 Likes
Rap quotes
Rap Music quotes
Song Lyrics quotes
Loyalty quotes
Support quotes
Being There quotes
True Friend quotes
I know it seems hard sometimes but remember one thing. Through every dark night, there's a bright day after that. So no matter how hard it get, stick your chest out, keep ya head up.... and handle it.
Tupac Shakur
73 Likes
Motivational quotes
Uplifting quotes
Song Lyrics quotes
Rap quotes
Hard Times quotes
Keep Trying quotes
Never Give Up quotes
I'll serve anyone like a blind waiter.
Lil Wayne
70 Likes
Punchline quotes
Rap quotes
Sponsored Links