click me
Summer is one of the seasons seen throughout the year in places having an extreme climate. Summer is the hottest season of the year, when temperatures are high. Summer season is totally contrary to the winter season, when the temperature drops down and people move around wearing sweaters, jackets and cardigans. According to Mary A. Ward, “But a girl of seventeen is not always thinking of books, especially in the Oxford summer term.” Summer is the warmest season, between spring and autumn. After the summer solstice, days are the longest and the nights are the shortest, and the length of the day decreases after the day of the summer solstice. The time of beginning of the summer season varies from country to country, regarding the culture, climate and tradition. According to Helen Hunt Jackson, “By all these lovely tokens September days are here, with summers best of weather and autumn's best of cheer.”
QUOTES
St. Patrick's Day is an enchanted time a day to begin transforming winter's dreams into summer's magic.
Adrienne Clark
5 Likes
St Patricks Day quotes
Positive Thinking quotes
Dreams quotes
Magic quotes
Summer quotes
Winter quotes
Change quotes
Spring quotes
Seasons quotes
Sponsored Links 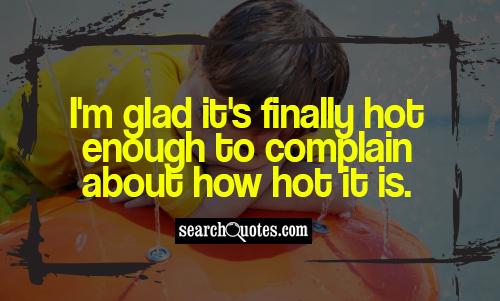