click me
Non violence is the best weapon developed by man so far and we cannot forget Mahatma Gandhi who practiced it successfully to attain freedom from the British rule. Non violence is the much needed thing in this war torn century. Human beings are one full entity and it is maddening to kill one another for the sake of a piece of land or power. Gandhi proved that anything can be achieved through non violence. “First they ignore you, then they laugh at you, then they fight with you, then you win” he said. Nonviolence has never lost any battle; it is the one that ultimately wins not only the battle but also the hearts. Non violence is not the sign of weakness. It is the sign of courage, determination and dignity. Nonviolence teaches you that not only victory that matters but the way in which we attain victory also maters. It does not give you any guilt conscience. Here is the collection of quotes on this most powerful and beautiful weapon called non violence.
QUOTES
At the center of nonviolence stands the principle of love.
Unknown
8 Likes
Love quotes
Nonviolence quotes
Principles quotes
Positivity quotes
Sponsored Links 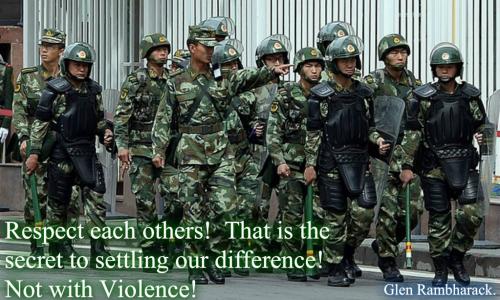 Each one has to find his peace from within. And peace to be real must be unaffected by outside circumstances.
Mahatma Gandhi
29 Likes
Peace quotes
Nonviolence quotes
The evil the enemy may do never expresses all that he is. Nonviolence is a wager-- not so much on the goodness of humanity-- as on its infinite complexity.
Robert Inchausti
1 Likes
Nonviolence quotes
I have been true to the principles of nonviolence, developing a stronger and stronger aversion to the ideologies of both the far right and the far left and a deeper sense of rage and sorrow over the suffering they continue to produce all over the wor
Joan Baez
5 Likes
Nonviolence quotes
There is no such thing as defeat in non-violence.
Cesar Chavez
25 Likes
Nonviolence quotes
It belongs to the very substance of nonviolence never to destroy or damage another person's feeling of self worth, even an opponent's. We all need, constantly, an advance of trust and affirmation.
Bernard Haring
5 Likes
Nonviolence quotes
1 2
TRENDING
TRENDING TOPICS
Jun 29
A New Day
Backstabbing
Birthday
Birthday Wishes
Boyfriend In Jail
Cheating Girlfriend
Emotion
Falling In Love
Fortune
Funny
Happiness
Hypocrisy
Life
Mothers Day Inspirational
Peace Of Mind
Pick Up Lines
Self Awareness
Self Centered
Soldiers
Unappreciated
ABOUT Terms
Privacy Policy
Removal Request
Sitemap
Contact Us