click me
Vulgarity is crudeness or bad manners that are offensive to others; vulgarity is expressed in speech, behavior and actions. Those actions or words that make others feel ashamed are termed as vulgar. Solomon Schechter says, “By vulgarity I mean that vice of civilization which makes man ashamed of himself and his next of kin and pretend to be somebody else”. Oscar wilde puts vulgarity in simple words thus” vulgarity is simply the conduct of other people just as falsehoods are the truths of other people”. Though vulgarity may create a wave or simply a ripple, it is only short lived and people tend to forget them quickly. It will not leave a long a lasting impact in the minds of others. It may just add spice to life but it cannot make a wholesome meal. Hence vulgarity is short lived . These quotes on vulgarity are enlightening. Read them.
QUOTES
Want to make a good first impression on a guy? Ask questions about him, seem interested, listen, giggle and swallow.
Family Guy
172 Likes
Dating quotes
Funny quotes
Witty quotes
Sex quotes
Vulgarity quotes
Humor quotes
Sponsored Links 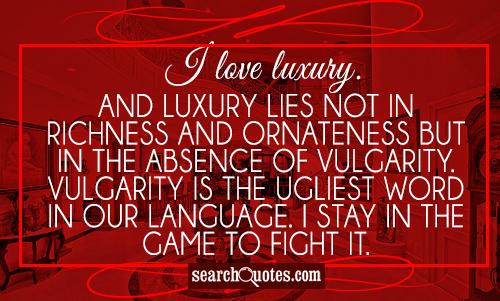