click me
An apology is asking forgiveness for any wrong deeds that one commits and realizes later. You ask for an apology or forgiveness when you deeply regret your actions and feel guilt. One should be honest, realize your mistakes, and learn from them. Mistakes are nothing but lessons. A human being evolves by making mistakes and actually learning from them. Ask for apology when you feel you have done something wrong. You may not be pardoned all the time and your apology might not be even considered, but do make an apology if you feel like compensating for your wrong actions.
QUOTES 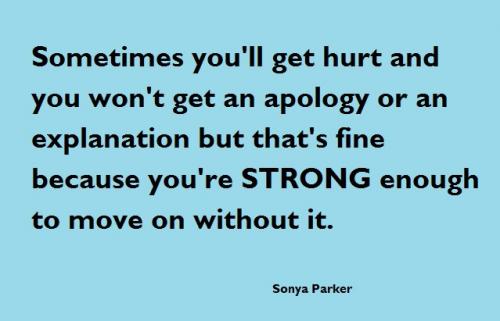 Sometimes you'll get hurt and you won't get an apology or an explanation but that's fine because you're STRONG enough to move on without it
Sonya Parker
16 Likes
Apology quotes
Hurt quotes
Being Strong quotes
Moving On quotes
The difference between Sorry and Thank you. You can say thank you to anyone at anytime you want. It doesn't make any difference to your life. Even it makes the other person feel better about you. But You can't say sorry to anyone, You have to be be sorry only when you felt so. Be sorry, only when you have done anything wrong or sometimes we can also say sorry to make someone feel special but that's a very rare case. We don't have to bow or feel low in front of anyone.
Nishan Panwar
47 Likes
Life quotes
Rules quotes
Simplicity quotes
Apology quotes
Advice quotes
I wonder how many relationships would begin the path of reconciliation and healing if one person were to do the brave thing: apologize.
Unknown
18 Likes
Relationships quotes
Healing quotes
Apology quotes
Making Amends quotes
Getting Back Together quotes 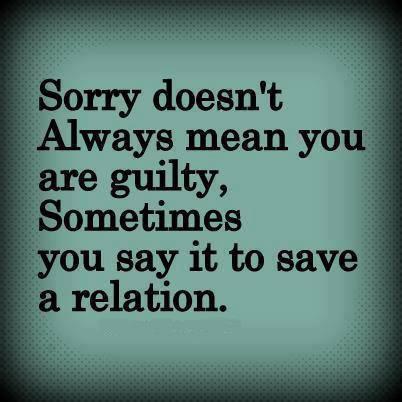 Sorry doesn't always mean you are guilty, Sometimes you say it to save your a relation.
Melchor Lim
37 Likes
Apology quotes
Apologizing quotes
Relationship quotes
Making Amends quotes
Guilt quotes
An apology is the super glue of lasting relationships. It can repair just about anything.
Melchor Lim
36 Likes
Apology quotes
Apologizing quotes
Making Amends quotes
Correction quotes
Healing quotes
Relationships quotes
Advice quotes
I miss you so much I would rather die. I don't know what to do, I just cant lie. I really want to hug you and kiss you right now. I really wish I can do it somehow. I hope you feel that I really love you. I wish you love me that much too. I am sorry for the times I have hurt you.
Unknown
634 Likes
Hurt Feelings quotes
Apology quotes
Missing You quotes
I Miss You quotes
Being Hurt quotes
All I Want Is You quotes
Heartache quotes
1 2 3 4
TRENDING
TRENDING TOPICS
May 25
Balance
Blessed
Challenge
Complicated Relationship
Electricity
Faith
Fake Friends
Funny
Funny Facebook Status
Imagination
Inspirational
Love
Motivational
Relationships
Smiling
Taken For Granted
Things Happen For A Reason
Words
Poems
Smiling
ABOUT Terms
Privacy Policy
Removal Request
Sitemap
Contact Us