click me
The term insanity refers to madness, craziness or foolhardiness. Insane people are those who talk senseless things and make up all weird things in their mind. Some people also view insanity as madness to the extent that it leads to violation of social norms. Insanity is a term that is akin to mental stability or mental deficiency. Someone who is mentally deficient is said to be an insane person. In the words of H.P. Lovecraft, “Bunch together a group of people deliberately chosen for strong religious feelings, and you have a practical guarantee of dark morbidities expressed in crime, perversion, and insanity.” Insane people believe in doing a particular task the same way repeatedly and expect the same set of results. Insanity is also deemed as positive by some people. Jean Dubuffet had once remarked,” For me, insanity is super sanity. The normal is psychotic. Normal means lack of imagination, lack of creativity.” She considered insanity as something particularly good.
QUOTES
My professional and personal experiences have not turned me off to relationships.., no my experiences have taught me that crazy has no bounds and sanity should be appreciated and never taken for granted.
Eugene Nathaniel Butler
12 Likes
Relationship quotes
New Relationship quotes
Bad Relationship quotes
Experience quotes
Relationship Advice quotes
Being Crazy quotes
Sanity quotes
Insanity quotes
Life Lesson quotes
Sponsored Links

There is no great genius without a mixture of madness.
Aristotle
35 Likes
Bi-polar quotes
Insanity quotes 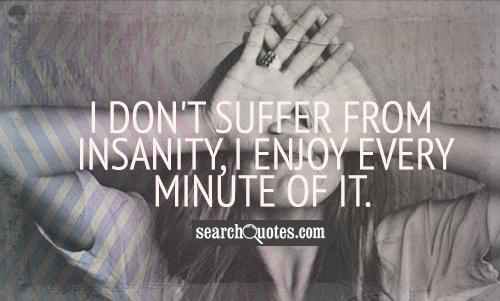