click me
Lust is an emotional and passionate feeling that you experience for someone. When you experience lust for someone, you fantasize about that person, usually in a sexual way. Lust is an erotic desire for someone. The word lust is phonetically similar to the ancient roman word, “lustrum”. The word “lust” was first used in the 16th century in the Protestant Reformation phase. In the words of Baroness Orczy, “A surging, seething, murmuring crowd of beings that are human only in name, for to the eye and ear they seem naught but savage creatures, animated by vile passions and by the lust of vengeance and of hate.” Lust has several meanings. It means having a personal inclination or longing for someone. It means unbridled sexual desire or lasciviousness. In the words of Tori Amos, “In our minds, love and lust are really separated. It's hard to find someone that can be kind and you can trust enough to leave your kids with, and isn't afraid to throw her man up against the wall and lick him from head to toe.” Lust should not drive you towards something that is morally or ethically incorrect.
QUOTES
Don't ever confuse the love of a loving woman with that of a lusting girl
Tshepo Koos Maluleke
147 Likes
Love quotes
Lust quotes
Complicated Love quotes
Confusion quotes
Sponsored Links 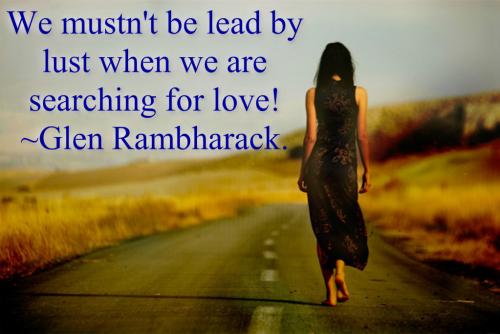 He was like candy; artificially sweet.
Aly Johnson
91 Likes
Girl quotes
Lust quotes
Fake Love quotes
There is a big difference between love and lust. You say you want to love every beautiful girl you see, but in your case it is evidently not love, but lust. It is physical attraction that takes hold of your mindset which is subject normal with you. You must learn to accept love if it comes your way, and to give love in return. Love lasts forever. Lust, like money, passes away.
Mak_786 Correction By Jacobusmaximus
58 Likes
Love quotes
Lust quotes
Love is never simple, do not fall in if you do know who your really falling for.
Unknown
28 Likes
First Love quotes
Lust quotes
Love Advice quotes
Sex just complicates everything , it stresses love it causes jealousy and it beats curiosity.
Unknown
71 Likes
Sex quotes
Lust quotes
Relationships quotes
Complicated Love quotes
Some people get lust, and love mixed up. Lust is when someone guesses at first there in love but really there not they just assume. Love is when someone knows for certain there in love they don't second guess.
Bryan Burden
61 Likes
Love quotes
Lust quotes
Being Confused quotes
1 2 3 4
TRENDING
TRENDING TOPICS
Jun 29
60th Birthday
Advice
Anger
Being Silly
Birthday
Blessings
Fortune
Funny
Hater
I Want You Back
Lesbian
Mother
Moving On With Life
Nursing School
Rap Music
Sad Breakup
Self Discovery
Top 100 Love
Traditions
Unappreciated
ABOUT Terms
Privacy Policy
Removal Request
Sitemap
Contact Us